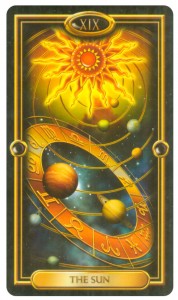 We enter this month with two planets in retrograde motion—Mercury, which rules communication, and Mars, which rules action.  The message these two retrograde planets bring us is useful, important and simple—think before you speak and act.  When Mercury and Mars go direct in a few days, thoughtless words and actions will come back to bite.

We do live in ‘interesting times.’  Everything we know is changing and will continue to change, including ourselves.  This change is as inevitable and irrevocable as the daily rising of the Sun.  At the same time, it’s also exciting and scary.  We are witnessing and participating in what is truly a new age.  There are several ways we can choose to experience this phenomenon of world evolution—we can freak out and curl up in a fetal position; we can freak out as we resist and vehemently deny that it’s happening at all as we fight for the return of a past that never was; we can consciously choose not to freak out and move naturally with the energy of change into these exciting and fertile new times.  On a daily basis we can easily see what choices are being made by the populace.  What choices are you making?

The twelve archetypes are grouped into three sets of illuminating, empowering expressions of energy.  The archetypes grouped with you reflect your current mode of expression.  Your affirmation will guide you in navigating your new terrain of possibilities and opportunities.  Print it out and read it often as a reminder to learn from your experiences as you celebrate your life.

“When you come out of a Pluto transit, you are changed forever.  In another state.  But during the process you don’t realize what’s happening.  Life can get pretty dark.  With Pluto, you can’t look ahead.  You can’t be impatient.  Most of all, you shouldn’t be afraid, because in the end there is nothing to fear.  You just have to surrender to the mysterious process of complete and total transformation.”  Michael Lutin

“The greatest danger in times of turbulence is not the turbulence; it is to act with yesterday’s logic.”  Peter Drucker

“It is enough simply to pay attention and trust the process: Whoever comes are the right people.  Whatever happens is the only thing that could have happened.  When it starts, is the right time.  When it’s over, it’s over.”  The Daily Guru