As promised, here is Day 1 of A Scottish Odyssey through My Eyes, Part 1.

Every few days, I’ll post another day’s experience with photos.

Once again I am happy to be able to say that I am beyond measure thankful to all of the people who joined me on what has been (and continues to be) a major transformational event in our lives. And I’m so thankful to all of you who are fellow travelers on the path of Spiritual evolution

(Odyssey– a spiritual quest of self-discovery; a journey home)

I awoke early on day one of the Odyssey, filled with hope, anticipation, a bit of anxiety and a lot of excitement. Sending silent prayers of gratitude to the Universe for this day finally arriving, I went downstairs to the hotel’s breakfast room and found that I had to tell myself, “Even though you’re as excited as a kid on Christmas morning, you have a big day ahead of you and you need to eat something! No matter when the individual Odyssey-ites arrive, every one of them will arrive on time, in time, not late!”

After breakfast (I managed to eat a couple of pieces of toast and drink some orange juice) I waited in the hotel lobby, reading the various texts from the travelers letting me know their progress as they made their way to Edinburgh. After the monumental travel delays many had experienced the day before, I was glad to read that some of them had actually landed and were at the airport’s baggage carousel waiting with their driver for their luggage to arrive. Others had just gotten off the planes and were about half an hour behind the first group. After going through the traveler’s official rite of passage– immigration and customs– they, too, would make their way to the baggage carousel and their driver. Remembering the road repairs and the delays my driver and I’d encountered on my way from the airport three days before, I calculated the amount of time it would take each group to get to the hotel.

Figuring that the first group should be arriving in twenty minutes or so, I picked up a newspaper and tried to calm myself by reading it. About five minutes in, I was halfway through one of the front page stories when I had the most compelling feeling that I had to put the paper down and go and stand at the wall of glass that fronted the hotel lobby. When I got there, I saw the most wondrous sight– a car carrying several of the Odyssey-ites pulling up to the hotel! I did not do a very good job of containing myself as I opened the lobby door, tore down the hotel’s front stairs and embraced them! Until that minute, I had no idea how much being with them on this Odyssey meant to me. Some I already knew, some I hadn’t met before (in this life), but they were all part of my tribe and all that mattered to me was that we were together again!

With hugs of welcome, traveler’s tales of woe and obvious joy and relief, we entered the hotel. Those who wanted to eat, I escorted to the breakfast room; to those who wanted to freshen up first, I gave my room number and key.

I returned to the lobby and tried really hard to act like a calm, mature adult as I prepared to wait for the second group to arrive. Reminding myself to breathe, I reached for the newspaper and before I could put my hand on it, there was that compelling feeling again! I turned, looked out onto the street and there, alighting from a car, were the ever so stylish Louise, Ralston, Dawn and Linda P.! This time I willed myself to calmly descend the stairs. Standing in front of that Edinburgh hotel, we all embraced and excitedly talked to and over each other. Ahh– the stories, the joy, the love! It’s moments like these that I treasure; it’s moments like these that remind me just how much God loves me. At last, we entered the hotel and I offered the same set of options to this arriving group of travelers. They made their choices and, no longer anxious, I realized I was hungry, too, and I joined them in the hotel’s version of a hearty ‘stick to your ribs’ Scottish breakfast.

At 10:00am that morning, we all met in the lobby for the official start of what we knew was going to be the grandest adventure ever. There were eighteen of us– the missing three whose timely arrival had been determinately thwarted by the dreaded Mercury retrograde imps would join us later. Carol and I handed out the Odyssey kits and personal Astrology charts to everyone and Nicky and Les, our guides and fellow Odyssey-ites, ushered us onto the coach that was to be our chariot for the duration of the grand adventure and introduced us to our driver, Davey. 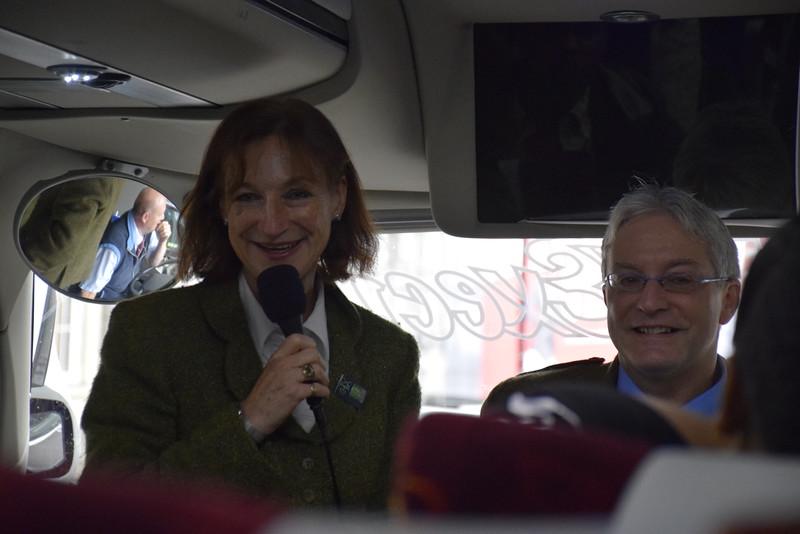 Our first destination was south to The Borders, the region of Scotland that borders England. As the coach pulled off and we eased into traffic, I listened with an indescribable joy in my heart as the Odyssey’s participants introduced themselves to each other and began that process of soul recognition and bonding that can only occur on a journey like this.

We drove through breathtaking countryside and watched the lovely, lush Scottish landscape slowly change into what I recognized as an equally lush and lovely English style layout of farms and forests. Our first stop was Abbotsford House, a beautiful palatial estate on the River Tweed and the home of Scotland’s national treasure, writer and poet Sir Walter Scott. In addition to being a phenomenal writer, he was also a great collector of all types of objects of historical significance, especially if they were connected to Scottish history. So much so, that in the very walls of his beloved home, he placed many stones from Scotland’s castle and abbey ruins.

When we entered the residence, our collective mouths dropped open as our gaze fell upon the many beautiful books– over 7,000– in his massive library. We marveled in awe at his collection of unique and fascinating objects– suits of armor, Mary, Queen of Scots’ crucifix, Napoleon’s gold cloak clasp and furnishings so beautiful that Patti coined the phrase, “Put a post-it on it!” She explained that it was customary for heirs to go through their relatives belongings and affix a post-it with their name on it to the item they wanted, thus, reserving it for themselves. We liked that custom and adopted “Put a post-it on it!” as our own personal acquisition cry. From then on, whenever one of us saw something we liked during the Odyssey, you could be sure the phrase, “Put a post-it on it!” was sure to follow.

The grounds were equally impactful– stunning in their beauty and serenity, their energy felt timeless. As we explored the grounds, many of us noticed and commented that being there felt like we’d stepped back into the early 1800’s. One of the estate’s guides told us that he loved working there so much that even on his off days, he’d visit and just enjoy wandering about the property. I didn’t blame him; if I worked there, I’d do the same. 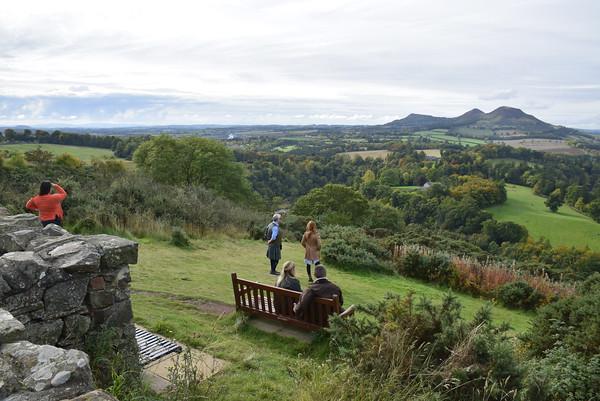 We stopped in the gift shop and made our first purchases of the Odyssey. From the beginning, I could tell that there was something different about how we as a group went about acquiring what spoke to our shopper’s hearts.

I think that on some sub-conscious level, we had all committed to gifting ourselves with whatever delighted our spirits; after all, that’s what this Odyssey was about– liberating, healing, embracing and relishing in that part of us that is directly connected to Divine energy, generosity and graciousness. We were good at it then and as the Odyssey progressed, we got better at it.

Our ability to enter a shop, spot the items that we identified with and purchase those items in a limited amount of time reached Olympic Games status– awesome to behold and deliciously beyond measure to be a part of. In some of the places we shopped, they’re probably still talking about it.

We re-boarded the coach heading for the town of Jedburgh to visit one of the houses Mary, Queen of Scots had stayed in during her brief return to her homeland. On the way there, we stopped to admire the beauty of aptly named, The Borders, from Sir Walter Scott’s favorite viewing site. Though still Scotland, the look and energy of The Borders seemed to me to be more English than Scottish. My eyes and mind connected with its beauty; my heart did not. 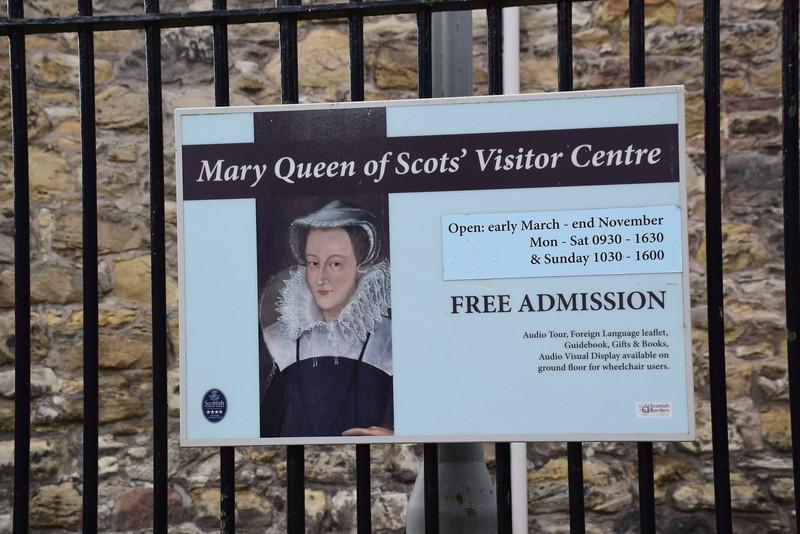 In Jedburgh, we stopped and got lunch at one of the town’s cafes. It was where I had my first taste of a wonderful ginger beer whose name I’ve forgotten and whose delicious taste I’ll always remember. After lunch, we made our way to the well-tended Mary, Queen of Scots house and grounds. The house, now a museum, was another place that time seemed to have passed by. I felt as though I were in the 16th century as I moved from room to room. It was a special feeling that seemed to reach into my soul and connect with it.

As I observed my fellow Odyssey-ites, I was pleased to see that the bonding continued to take place and deepen. Old souls were finding each other and taking up where they’d left off in previous incarnations. I love when that happens!

Our time in Jedburgh at an end, we boarded the coach and headed for one of my favorite places– Rosslyn Chapel! 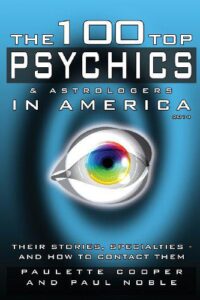 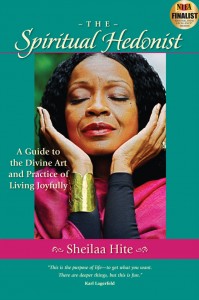