At long last, here’s Day 1, Part 2 of a Scottish Odyssey 2015 Through My Eyes. It felt good to get back to that time and experience it again. I’d gotten sidetracked by teaching a class on Kim Wilborn’s fantastic Tarot Telesummit and prepping my now SOLD OUT– Yay!!!– Sedona Odyssey!

I still have a lot on my plate, however, there’s finally room to re-immerse myself in the wonderful memories of Scotland and our past Odyssey, so the rest of it will be coming more regularly from now on.

You have found a home…

The coach ride north to Rosslyn Chapel was the ‘in-between’ break so many of us needed. Most of the Odyssey-ites were still tired from the journey to Scotland in addition to having their senses stimulated by the beauty, energy and sights of a new place. As Nicky and Les continued to point out places of interest, I noticed that several of the riders napped, some continued to socialize with each other, some wrote in their journals and some were content to simply look out of the window and enjoy the passing countryside.

As the coach drew nearer to Rosslyn Chapel, I could feel the shift in the energy. We all could. Those who were asleep, woke up, the writers closed their journals, the socialization came to a halt and everyone’s attention and eyes were focused straight ahead through the windshield of the coach. When the coach turned into the Rosslyn Chapel parking area, the group let out a collective sigh.

We stepped off the coach in a kind of reverent daze– though we were only at the front of the building that housed the cafe/gift shop, we could feel the energy of centuries of mysticism and grace. Donna and Myk, who’d been delayed getting to Edinburgh, met us there. Nicky and Les led us into the building and while some ordered tea, most of us took the opportunity to inspect the gift shop wares. Here, too, we all found something that spoke to our souls. The items in the gift shop were of good quality and design, which made the experience a lot of fun (it also made choosing more difficult!). The year before, I’d missed out on getting an “Apprentice Pillar” candle– the last one had been sold just before we arrived. This time I was much luckier– they had one left and I felt like a 5-year old at my own birthday party as I purchased it. There’s nothing like the sweetness of getting something you want! 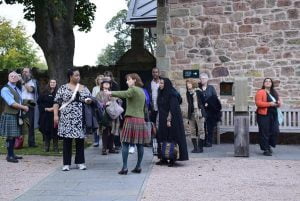 Nicky introduced me to the Chapel’s tour director and I asked her if Dawn could enter the Chapel early in order to tune her harp. She promised to set Dawn up in the baptistry at the rear of the Chapel where she could tune her harp and play after my talk and guided meditation. Grateful for the tour director’s help, I was overjoyed as I imagined how stirring it would be to hear beautiful harp music emanating from the baptistry all the way through the chapel! “Can it get any better than this!?” I asked myself as Dawn accompanied the tour director to the chapel. 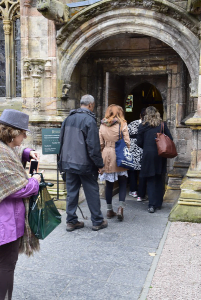 A few minutes later, it was time for the rest of us to enter the Chapel. With the openness and awe of schoolchildren on a special class trip to see the wonders of the Universe, we left the gift shop building and filed into the courtyard. Our first view of Rosslyn Chapel was breathtaking! We gazed in wonder at the beautiful building as the Chapel Guide opened the ancient carved wooden door for us. William, the Chapel cat, came out to greet us– always a good sign! As we approached the door and prepared to enter, we heard what I can only describe as beautiful celestial singing accompanied by equally beautiful harp music. The music drew us in and there, in front of the alter table at the front of the Chapel, was Dawn– playing and singing us in. Sublime! My soul soared!

I had to remind myself to breathe and stay focused. (The tour director intuitively knew that Dawn’s channeled ethereal music belonged at the front of the Chapel and seated her there.) “Yes” came the answer to my question, “it can get better and this is evidence of it!”) 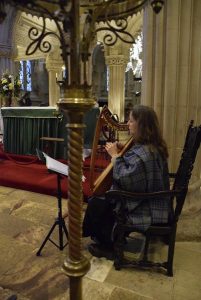 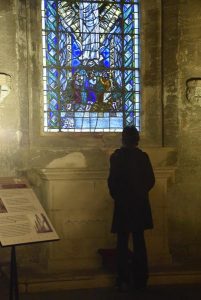 As everyone was choosing their seats, I made a request of our Rosslyn Chapel guide, Niall, (who remembered us from the previous year) and he wasn’t at all daunted when I asked him to condense his 1 & ½ hr talk into twenty minutes. There is so much to see there that you need someone to point out and expound on the eclectic beauty of the building. (He didn’t have to point out that it’s a rare and special honor when William, the Rosslyn Chapel cat, graces you with his presence by sitting on you or allowing you to pet him. We all intuitively knew it. I noticed that both Claudia and Louise were the chosen one’s this year.) Having only twenty minues, Niall did an excellent job. Dawn played and led us in song and Linda P. gave the invocation. After another of Dawn’s beautiful songs, it was my turn and I directed everyone’s attention to the bench with the Odyssey journals and asked them to choose one as well as a personal quote and elemental tree spirit bookmark. 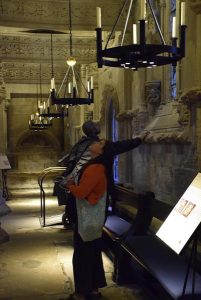 I then led the guided meditation and afterwards, we explored the beautiful Chapel. Niall stayed with us and graciously answered our questions and pointed us in the right directions as we explored. On this trip, just as on the previous Scottish Odyssey, we were blessed to be allowed to take photographs in the Chapel with their permission although there’s a strict ‘no pictures’ policy!

Finally, our time at the Chapel came to an end. It was difficult to leave a place of such wondrous perfection. We were all so affected by the ethereal beauty and embracing energy of the Chapel and our souls, recognizing that it was ‘home,’ didn’t want to go.

At last, we re-boarded the coach for the drive back to Edinburgh and our first group dinner. The drive back to the city was short and we were at the restaurant in no time. After we were all seated and had ordered our food, I spoke about our Odyssey and its purpose on our path to our soul’s evolution. As I do with all of my Odysseys, classes and gatherings, I asked everyone at the table to introduce themselves and to tell us why they had chosen to come along on the Odyssey.

The answers were wonderfully revealing and heartfelt and each person’s back story gave us a view of their inner world. As we moved around the table, I noticed my friend, Daniel. He sat slumped in his chair and seemed somewhat dispirited. When it was his turn to speak, he surprised all of us by shrugging his shoulders and saying, “I don’t know why I’m here. I have no interest in Scotland. I’m only here because Sheilaa called me and told me I needed to come along.” Wow! He spoke from his soul in such a way that we could all see, hear and feel his unique mix of pathos, comedy, willingness and resignation.

I’d known Daniel for more than ten years and for the last eight of those years, I’d noticed his joy of life and delightful inner Light slowly leaking away, like air out of a balloon. Although his physical presence was there, I hadn’t actually seen the ‘real’ Daniel in quite a while, so I wasn’t surprised that I’d received a message in meditation instructing me to contact him with the news that participating in the Odyssey was on his soul’s ‘things to do now’ list. As I sat there watching him, I knew just how important his being on the Odyssey was for him and I looked forward to his rediscovery of his essence and reconnection to his heart and spirit.

After dinner, we were treated to a wonderful, spirited talk from one of Scotland’s premier Storytellers, Calum Lykan, a proud, true Scotsman who wore the kilt, not as a fashion statement, but as his everyday garment. Everyone was enthralled with the word picture he painted of the Scottish spirit. He’d been our after dinner speaker at last year’s Odyssey dinner and once again, he did not disappoint! His passionate delivery was a gift that opened a window in our hearts and confirmed that we were in the right place at the right time. 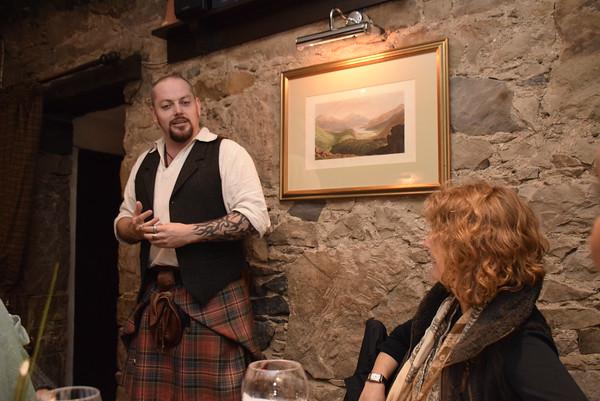 Dinner and the long day finally over, almost everyone left the restaurant and headed for the hotel. Donna and Myk stayed behind and helped me take the various items, bags and minutiae that an Odyssey leader must carry with them back to the hotel. On our leisurely walk to the hotel, I got to know them better and express my gratitude at what I’d discovered about them– how kind, thoughtful and generous they were (and are).

Back in my room at the hotel, as I prepared for bed, I reflected on the splendid first day we’d just had and how apropos our word of the day– Destiny, and our Tarot card of the day– The Magician, were for us on the start of what we could all feel would be a life transforming experience. I fell asleep looking forward to the magic of the next day and giving thanks for the gift that is my life and for the gifts that those who are in my life are to me.

NEXT: Day 2 of “A Scottish Odyssey Through My Eyes …”